When was the last time you stepped outside your door with the goal of finding adventure? Beating your fastest time on your drive commute doesn’t count as adventure, plus, those red-light tickets add up fast. I mean when did you truly, sincerely carve time out of your week to just head out for adventure? If you are a trail runner, you probably answered that question in a hot second. If not, well, lets talk about why those trails are calling your name.

I didn’t even know that trail running was a thing until about four years ago, I joined a team to run Sinister 7 in Crowsnest pass and way undersold myself by picking the shortest leg. By the time I finished, I was dirty and tired and hopelessly hooked on the ridiculousness of the sport. I already knew I loved to run but had only tried road races which are focused on nothing but speed. This did not overly suite me since I’m not particularly fast. I also already knew I loved to hike and am eternally thankful to my parents who introduced me to backcountry trails from a pretty young age. So, when those two worlds collided, my head exploded, which also makes me wonder why I had not connected those dots sooner. How did I not figure out that if you can walk on trails, you can run on them too? I’m a slow learner I guess.

I also knew that Edmonton had a pretty fantastic trail system along the North Saskatchewan and its many ravines, but I had really only explored the paved trails when my family would load up our bikes and drive in from the farm so we could ride on pavement. As I’m writing that I see how pathetic that sounds, don’t worry, we had electricity and running water, just no pavement. I had no idea that snaking off those paved city trails was hundreds of kilometers of single track just waiting to be run.

When I first moved to the city at 19, I ventured onto a narrow trail somewhere near downtown and scared a homeless guy, who yelled at me and ran off the trail into the bush and left his shoes and drug paraphernalia in the middle of the path. I remember staring down at his shoes and debating calling after him to let him know he didn’t have to run away barefoot, but then I thought “What the hell am I doing? Here I am, this naïve girl from the middle of no-pavement-ville rural Alberta, running alone through downtown and stumbling upon drug addicts hiding in the bushes?” It took me over a decade to re-discover those narrow trails; thanks alot homeless guy.

I spent much of that decade running road or worse; the dreadmill at whichever gym had the cheapest childcare. Sure, I gained some speed, but since my primary motivation was to lose that baby weight between three pregnancies, all those miles left me rather uninspired. I needed nature. I needed adventure. And I needed to get brave and go out to find it.

I started by exploring the wide paths in the ravine close to my house. Then I hit Terwillegar dog park, still mostly sticking to the well used trails, dodging labradoodles and their sauntering owners. I even ventured downtown if I could convince a friend to come with me to protect me from the barefoot homeless guys. But wide gravel or wood chipped trails still had me pushing for speed and missing all that adventure that lay off the beaten track. Turns out, homeless guy was onto something even if he ‘slightly’ missed the mark; running in nature is like doing drugs. You keep needing more and more to feel good. And so I just kept exploring. I partly credit the fact that I worked up the courage (junkie desperation?) and put myself out there on social media to connect with other people also looking for a trail fix and I gained confidence to try new-to-me trails and here is what I learned. It is ALWAYS an adventure. 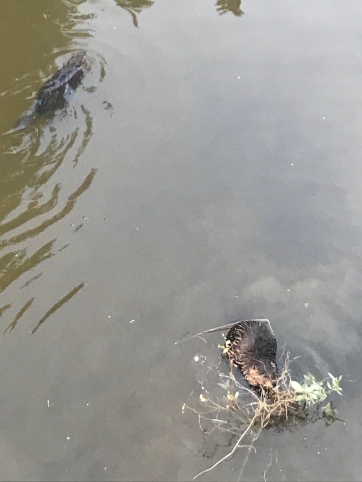 First off, the wildlife in our city is incredible. Woodpeckers with bright red heads, coyotes and their pups, moose twins, small white tail deer, long legged herons, comical squirrels and beavers. Oh god, the beavers. One time I scared one while running on a path between the tree he was working on and his home in the river and he sprinted across the trail, nearly tripping me. First, I let out a loud and meaty cuss word and then laughed until I had tears running down my cheeks. A running beaver is about as graceful as a sandbag with a canoe paddle slapping behind it and is quite possibly the greatest thing I have ever seen. I’ve also been chased down the trail with owls swooping at my head which was slightly less funny and more terrifying but still makes for a great story.

Secondly, a magical thing happens when you get off your couch and outside; it gives you a chance to re-set, to gain a new perspective. There is even a science-y word for it; Biophilia. It means that as humans we are innately hardwired to seek out connection with life forms outside ourselves and that when we do, those other life forms (trees, plants, animals) give back to us in ways that science can’t even figure out. It changes us on a cellular level. It heals us. Don’t believe me? Get off your phone and go outside and find a forest, walk in it and notice how much better you feel. No wait! Don’t leave! Finish reading this first, ‘like, comment, share’ and THEN go find a trail.

What else heals and changes you on every level? Exercise. And it is nearly impossible to be sedentary in nature. So when you get out and explore your biophilic tendencies you are guaranteed to get some movement as well. Win win. I call it E2. Sure, you can hit the gym and get a good workout and there is nothing wrong with that (hopefully you like other peoples swass marks on the bench and hairballs on the changeroom floor), or you can double the value of your workout hours logged and get outside to reap all the other magical healing powers the forest is just waiting to offer you.

I get it, it’s easier to stay inside. There is always work to do and kids to care for and Netflix to binge on, and lets face it, the weather in Edmonton leaves a compelling argument to hold down that couch. But trust me, our wild seasons make getting outside that much more of an adventure. The forest changes dramatically week to week and never, ever gets boring. It gets hella cold. But never boring.

The other great thing about trail is that you are far less likely to experience injury. I can hear your cries of protest “But roots to trip on! Rocks to twist your ankles!” Yes those are certainly risks. But when you run soft trail you experience far less impact then when you run on hard pavement. Less impact means less repetitive stress. Less repetitive stress means happier muscles and tendons. Speaking of muscles and tendons, all that time spent dodging roots and jumping over rocks means that every step brings a slightly unique movement, working everything in every way imaginable, making you really, really strong. Strong is good. Strong means less injury and a nice butt. Do you really need a better reason to hit the trails?

Start small if you have to and find a trail, any trail, and move forward. And don’t worry about distance, or time or how fast you go. Just move. Look around. Breath it in. Take a dog or a child if you need help appreciating the small beauties of nature around you. If you don’t have one of those, then borrow one. I’ve got extras if you need. If you’re not sure where to go, start asking around, explore, talk to other people you see on the trails (I bet homeless guy knew those trails inside and out, I should’ve asked). Follow me on Strava or even better, message me and say you need some E2 and I’ll hook you up, turn you into a trail junkie too.  If you need a goal, like, to make sure you got a workout it, aim for ‘time on feet’ instead of a kilometer or speed goal which could set you up for disappointment if you don’t reach it. The most important thing is to get out and explore. Commit to not coming back to that couch until you’ve found the adventure you didn’t know you were missing. Happy trails friends.