If you clicked on this in the hopes of finding a comprehensive training plan that goes something like this:

Day One: Get out of bed, push through the fog of your existential crisis, run 12 km.

Then I apologize because this post will not give you details of my training plan. For one, because I would far rather talk about existential crisis then numbers and workout specifics. And two, because there is no one right way to train for this stuff. I’ll lay out a general idea of what I have been up to the last six months, but in the end, I would highly recommend going with a run coach who is responsive to your goals and understands your personality. A good coach will tailor a plan that will work with your lifestyle to get you the results you’re looking for and that is totally worth the time and expense. Alternatively, you can Google “How to train for 100 miles”. Good luck with that.

My official training plan started January 1st, but the journey started 3 ½ years prior when I ran Leg 1 of Sinister 7; it was 16 km and left me hungry for more. It was the first time I had ever heard of someone running 100 miles and although I was intrigued, I would have laughed at the thought of ever training for that goal myself. After a successful road half marathon later that summer, I decided to set my sights

on trail and ultra, and trained for my first 50km race, Black Spur Ultra the following year, and then did a few more 50-85km events over the next two years. But it was really only last summer, while spending the weekend in Colorado, pacing for a friend at Leadville 100, that I really started to seriously consider that maybe I could do this too. So, sometime last fall, I picked a run coach, Paul with

Evolution Hill , and told him I wanted a plan that wouldn’t leave me a frazzled, exhausted mess. My biggest goal was to make it to the start line in excellent physical and mental health; no injuries and feeling happy, and I’m thrilled to report that I’ve accomplished that. I feel great. I feel ready.

So how did I get here? Well, I started by having a completely honest conversation with Paul about the kind of plan I knew would work for me. Traditional plans usually have really specific run and workout goals for each day, but knowing the way my brain works, and my tendency to push for perfection means that those sorts of plans feel like a massively overwhelming to-do list that leaves me feeling like I’ve failed if I didn’t follow the plan exactly. My life is way to busy to throw that kind of pressure in; I need flexibility, I need to be able to adapt my training to work with the rest of my life and highly structured training plans simply do not work for me. Instead, the plan he gave me outlined weekly total run targets and it was up to me to figure out how I wanted to divide those distances up over that number of runs. So if it didn’t work to run as much as I wanted during the week, that was fine, I would just do the best I could on the weekend to still reach my goal. It sort of looked like this- Week 1- 50km over 3 runs, Week 2- 65km over 4 runs etc. building to a 100 km week at my max. Easy weeks, building up to a peak week, followed by an easy week again. The plan also included an elevation gain goal, the goal of 3 strength sessions a week, 2-3 cross training sessions of either row or bike, and a yoga session. This all sounds nice on paper, but let’s talk about what that actually looked like in practice.

It meant a lot of 5 am alarms for weekday strength sessions in my basement; either High Intensity Interval Training or weights (squats, lunges, deadlift repeat!). It meant late night yoga that sometimes doubled as a heat training session. It meant a lot of time on the rower in my basement, with the music blaring and the kids dancing around keeping 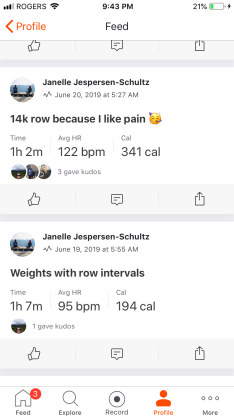 me entertained. It also meant spin class during swim lessons at the rec centre and even a couple road bike sessions. It has meant a neglected house, almost no tv, not nearly enough books, a few missed soccer games and swim lessons, and shortened nights out cause the morning alarm comes quick.

Most of all it meant a LOT of running. Sometimes my runs had to happen alone at 5 am on a weekday before a full day of work and I’m not gonna lie, as much as I like running, there was plenty of times it was a struggle to get out the door. I never

regretted it once I got going, but finding that discipline when you’re tired and under a time crunch is not always easy. Those runs often felt like work, and usually that was exactly what they were as I would try to focus on speed intervals, or elevation gain and do hill repeats to make the runs as quality as I could.

But the best runs, the really magical ones, were the weekend runs. And lucky me, I’ve run every weekend for at least the past year. Twice most weekends. Sometimes all weekend. So, lets focus on that, cause that’s where the good stuff really happened, where all that hard work, cross training and strength really paid off. I would usually head into the weekend with 25-30km accumulated during the week over two early morning weekday runs. So, depending on my total goal for the week, that meant I would need to accumulate between 25-70km on the weekend. Planning for those runs were almost as fun as actually getting around to them. Sometimes it was a rather spontaneous text from a friend “hey I need to run 30k Sunday and need to be done by 9:30, you in?” and before you know it, we would have a group assembled

ready to run. And sometimes it was weeks put into planning a mountain trip. Whether it was well planned or spontaneous it was always a unique adventure. Each run memorable in its own way.

I’ve run in groups of friends, many of whom are also working towards big distances this race season, and I’ve run alone. I ran in -41’ C windchill and once in +25’C (still waiting for those hot summer runs!) Did a couple days in the mountains with up to three

mountain summits in a day, and ran from one side of the Grand Canyon to the other and back. (Rim2Rim2Rim: Running the Grand Canyon in a Day) I podium finished a 50K in the freezing cold (Winter River Valley Revenge: Well that was hard) and ran from the Kinsmen-Henday-Henday for no reason at all. I logged countless other runs along the North Saskatchewan River, Whitemud Ravine, Millwoods Ravine, MacTaggart Sanctuary (got lost EVERY time!) and every other green space that hides trails in this fine city. I grew frosty eyelashes until I could hardly see anymore,

sweat until I could wring out my clothes, lost a toenail (only one this season!) Cut up my knees, shins, arms and got weird chaffing in all kinds of places. I’ve practiced running on a calorie deficit, eating all kinds of things while running, and even practiced running on a full stomach; post-Christmas dinner in fact. I’ve been bored on the treadmill or track the few times I ran there and made the most of it by listening to podcasts about, what else? but running of course! I’ve woken up to run at 4 am, started runs at 9 pm and ran all the way through the night twice (Night Running. ). I’ve run with a lump in my throat, and in full on ‘can’t breath’ heart-sobs. I ran at 3 am on the cold February night my good friend died (Run Forever: In Memory of Amy Alain) and continue to think of her every time I hit the trails. And in April I got to run a pretty special 10k in Jasper with her husband where her wet footprints appeared on the pavement beside us. I ran through my grief because that is the only way I knew how to process what just happened; and just as often I run through my joy because again, that is the only way I know how to process what happened.

And that, my friends, is the messy and spectacular way you train for a 100 mile race.

I’m not going on and on about this to showboat about how much I’ve accomplished. Not at all. Rather, as I write this l I am in awe of how fortunate I am. That my body allows me to do all this. That the people around me have supported me in this goal. And that in one weeks’ time I will be toeing the line at the biggest and most daunting challenge of my life thus far.

A friend recently shared this quote, and it really resonated with me.

“Racing isn’t a test. Racing is a celebration.”

Say it louder for the people in the back cause we got big things to celebrate and everyone is invited. Whatever happens out there next weekend has almost become irrelevant because the process of getting here has been the biggest reward of all. Running 100 miles is really just the celebration of all that has happened so far. Sure, it will be a ridiculously painful way to celebrate, but I’m ready. And that sounds to me like it is worth a really long trail party.